Meet the fast-footed 16-year-old who’s taking a 718 Spyder into the record books.

Chloe Chambers has achieved more in 16 short years than most do in a lifetime. She’s an honour student, a karting champion, a black belt in taekwondo – and as of September 2 she’s the Guinness World Record holder for the fastest Slalom in a 2020 Porsche 718 Spyder.

There are many automotive world records that require commitment, like World’s Hairiest Car or the Most Stickers on Cars. The record for World’s Fastest Slalom, measured by the fastest time around 50 cones spaced 15.05 metres apart, requires a precise driver with a precise car. The previous record stood at 48.11 seconds to cover the 2,500-foot slalom distance. 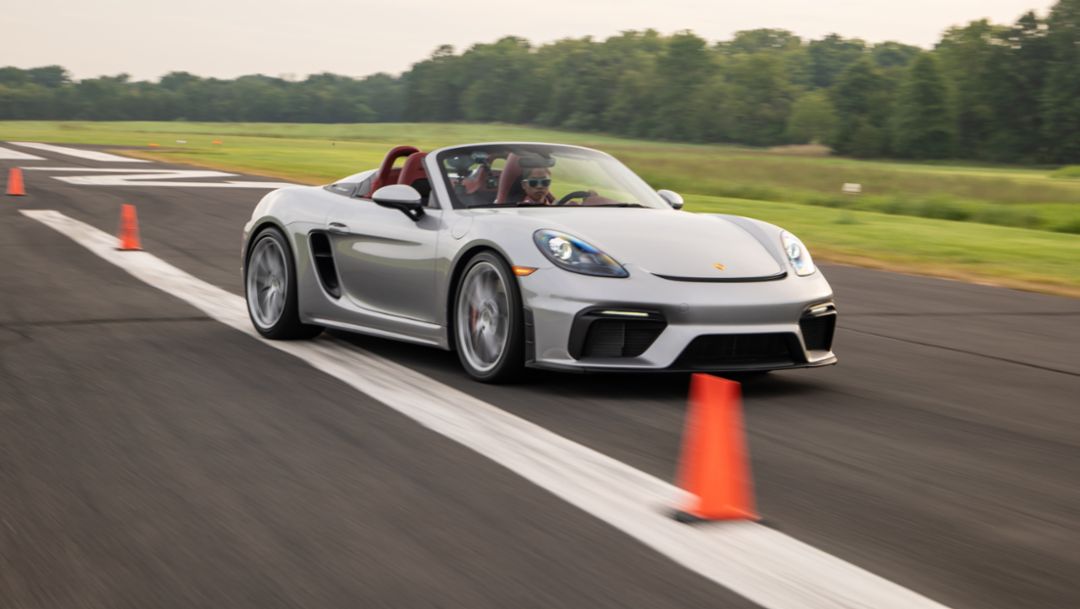 Growing up in New York’s verdant Hudson Valley, Chambers spent her youth watching Formula One with her father Matt, as well as tagging along for autocrosses in his race-prepped Porsche 944 Turbo. Soon it was the young Chambers racing and by the time she was eight she was named champion of her region. Three years later she was a state champion.

“I really enjoy driving, I think it’s fun,” she says. “I do like the competition piece of it. And I just really enjoy doing it, to be the best at something.”

Despite all these achievements, she’s still a teenager. In the days leading up to her record attempt Chambers spent her breaks eating pizza, joking around with her siblings, and even getting out her kart for a few runs around the empty airstrip where she practiced for the attempt. But unlike most teenagers, she was handed the keys to a brand new Porsche 718 Spyder and access to an open runway.

Over the course of Chamber’s run there weren’t many opportunities to go straight. It’s why she was grateful to have the Spyder’s lowered body, carefully tuned suspension, wide toe angle, and grippy standard-fit Michelin Sport Cup 2 tyres.

In order to achieve the record a driver has to find the right balance so as not to lose momentum along the run. Too much understeer pushes a car’s nose wide of the cones. Too much oversteer requires the driver to back off the throttle. This is why the Spyder, with its mid-mounted engine, is perfectly designed to dance through the obstacles.

Setting up for a record attempt is no small feat. A team of professional surveyors measured out each cone beforehand using GPS to ensure not one was out of place on the runway of Solberg Airport – a small airfield nestled in the rolling hills outside of New York City. A drone flew overhead, buzzing through the cool late summer air to document each moment and assure no cone was hit.

While all this was happening, Chambers calmly watched from the sidelines, unfazed by the cameras, survey teams, timekeepers, and the witnesses on hand to assure her attempt was valid.

Her warm-up runs were precise and quick, edging close to the record while putting heat into the tyres. If she ever had a moment of doubt it didn’t show on her face: she had the calm and professional demeaner of someone who had put her talent on the line before.

Wearing bright turquoise sunglasses, Chambers accurately pivoted the completely standard GT Silver Metallic Spyder around the cones for her record attempt, tying the record to the hundredth of a second while her family looked on.

On the next run the cones were cleared in just 47.45 seconds – more than half a second faster than her goal. After dozens of practice runs Chambers instinctively mimicked the back-and-forth motion of the Spyder’s quick steering as she waited for the surveyors to verify that she hadn’t so much as nudged a cone.

The first sign of emotion came when her father let her know she had taken the record. “Oh thank goodness!” she exclaimed, jumping out of the car for a hug. “It was a great learning experience for me,” she grinned afterwards. “I’m super-happy with everyone’s effort and help in achieving our goal. It was a fun week, required a lot of focus and patience, and I’m grateful for the amazing opportunity.”

Why Buy from Porsche of Halifax?

About Porsche of Halifax

Porsche. Utterly unlike any vehicle you'll ever drive. And we are like no other dealership you'll ever drive into. When it comes to the finest in workmanship, technology and exclusivity, you'll want to come to Porsche. So when it comes to buying or servicing your Porsche, we want you to come to our dealership. Our certified sales professionals, the most highly trained service technicians in the industry, and an ongoing commitment to customer care all set us apart from the crowd. Not to mention selling and servicing one of the most desired brand names in North America. Porsche. Welcome, and we hope you enjoy your visit - virtual or otherwise!

Connect With Porsche of Halifax